A 30-something's lovingly sarcastic journey through all of Sweet Valley High, and then some 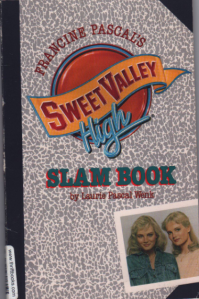 AWWW CHECK IT OUT

Francine decided it wasn’t good enough to release a book about slam books. No, she had to release an actual slam book itself. And here it is! My sister and I both went out and bought these ASAP even though none of my girlfriends had one. (I was only seven, and the only one of my friends who read Sweet Valley High at that time.) She passed hers around in school, however, and even got it taken away once. I’m not sure where my original is, so I went and bought another copy off Alibris.com. Andrea Charlton, if you’re out there, I’ve got yours. Don’t worry, I won’t broadcast the names you put in here … Heh heh.

The book opens with a letter from Elizabeth (with post-scripts from Jessica) telling us how the Slam Book works. Different typefaces are used for each of them so you can tell who’s talking later on. Liz has a no-nonsense typewriter print and Jessica has a fun aqua cursive style. Very appropriate. The rules for the Slam Book are basically the same as they are in Slam Book Fever: you have three sections, Boys, Girls, and Crystal Ball, with categories in each section. You write the name of a person you think fits each category on the corresponding page and then pass it to your friends so they can write their own choices in your book. Then you get lots of fun anonymous name-calling. (Anonymous, that is, assuming you don’t already know what their handwriting looks like!) Here’s something different: each page has two dotted lines going across the corners so that you can fold it down after your write your choice in your own book. That way the kids writing in your book have to make 1/137th more effort to find out what you really think. And to see what your handwriting looks like so that they can tell what you wrote in their books. Seriously, is a folded-down corner really going to deter anybody? I would’ve totally peeked! My sister and I didn’t even bother to fold down our corners! In addition, the Slam Book also includes some fun extras in it – advice column letters, horoscopes, and a calendar.

Liz and Jess lay down some ground rules because of course, only they got to have all the fun with ruining people’s love lives and disrupting class. You’re not supposed to use the book for anything mean, and you’re not supposed to use it during class. Can’t you just see Liz storming into your math class to snatch the book away from you and tell you to pay attention? I guess now that these rules are in place, Liz is suddenly a fan of the whole slam book idea. Funny bit: she also notes that she and Jessica argued about which categories to include. “She wanted to fill the book with categories such as ‘Best Looking,’ ‘Biggest Flirt,’ and ‘Best Gossip’ – and that’s where we disagreed. I’m more interested in choosing things like ‘Best Athlete’ or ‘Smartest.’ Jessica says that’s goody-goody stuff and boring.” Ha ha! How clever. Yes, that is boring, Liz, you freakin’ halo-sporter you. Lastly, the twins note that you’ll see where they wrote their own choices on certain pages. Oh boy.

Girls section: I’m not going to name all the categories, just the ones I find interesting or that one of the twins put something in. It starts off with “Most Like Elizabeth Wakefield” and “Most Like Jessica Wakefield.” I would’ve appreciated a “Most Like Betsy Martin” or “Most Like Annie Whitman” but I guess that’s getting into the “mean” categories. “Most Popular” shows that Liz put down Jessica and Jessica put down Liz. How surprising. “Biggest Flirt” does NOT have Jessica written down. Aw, we wouldn’t want A.J. Morgan to see it and get the wrong idea! “Best Athlete” cracks me up because my Slam Book’s previous owner, Andrea, or one of her friends wrote “[Girl] thinks she’s the best athlete, but she’s not.” HAHAHA! Liz put Dana Larson for “Most Talented.” Please tell me you’re talking about her singing and not her lyrical writing abilities, Liz. Jessica put Lila Fowler for “Best Dressed” and Caroline Pearce for “Best Gossip.” “Most Loyal Friend”: Liz says Enid Rollins (shocker), and Jessica put “Cara Walker.” Hmmmm … yeah, I guess Cara is a much better friend than backstabbing Lila or skanky old Amy. There’s a blank page on the other side of that last one and one of old Andrea’s friends put “Mega Worst Dancer” as a new category. Wow Andrea, there is one chick listed in this book that you guys are DEFINITELY not a fan of. I couldn’t help but notice. Hahaha.

Boys section: The first category is “Most Like Bruce Patman”. Uh … so “Most Rapey”? Okay. Hey, why is there no “Most Like Lila Fowler” in the Girls section? You vain little twats, putting “Most Like” yourselves in there but not the esteemed Ms. Fowler! Oh, and the illustration for “Most Popular” in both the Girls and Boys sections is a piece of notepaper with two names and meeting times written on it … so I guess if you’re going to meet up with two friends in one day, or whatever, that’s how you know you’re really in demand. I don’t know; I’m really picking at this thing now. Alright, back to Boys. Jessica says that “Biggest Jock” is Ken Matthews, but he might not appreciate being put in that category now that Andrea or one of her friends has altered it! Someone crossed out “Jock” and replaced it with “Dick” with a corresponding drawing nearby! Yes, that’s right, I can see where you tried to erase the roughly sketched penis and it didn’t work! Elizabeth is going to come after you for violating the rules!

For “Smartest”, Liz says Allen Walters and Jessica says “Peter DeHaven.” “Most Talented” is Guy Chesney, according to Liz. Liz also said Winston Egbert is “Class Clown.” Never saw that one coming. And then lastly, we have “Nicest” with Jessica’s choice of Tom McKay. Really? Tom was one of the frat brothers that helped harass Josh Bowen. And once again, we have Andrea’s added category of “Worst Dancer.” At least it’s not “Mega Worst” this time!

Crystal Ball section: Andrea changed “Most Likely to Be President” to “Most Likely to Be Prime Minister” since she is from Canada. She and her friends really dig them some Tom Cruise, also. I notice the “Most Likely to Have Six Kids” page is blank of any suggestions from Liz or Jess, which must be because Jessica threw a tantrum over that one in Slam Book Fever. There aren’t any contributions from the twins in this section at all actually, which is pretty short.

Advice Questions: Letters asking Liz and Jess for advice are printed in the category sections on the opposing pages. Liz answers one question, then Jess answers the next, etc. These are supposed to be questions their friends always ask them, because they’re advice mavens. There’s a weird one to Jessica from “Worried” who says her friend doesn’t want to double date anymore. Jess is like, “Just ask her what her problem is.” Haha, I bet I know what it is. She wants to make out with her man without you breathing down her neck, Worried! GOSH! But WAIT! What’s this? “In Love” asks a question about her boyfriend being afraid she’ll meet someone else while she is a junior counselor at summer camp. Jessica of course first tries to dissuade In Love from getting tied down, but then she adds that if you must date someone seriously, writing lots of letters will help. “It’s worked for my sister Liz!” RIGHT! Because when Jeffrey was away at camp and calling and writing frequently, it worked so well! Liz didn’t fall in love with another dude or anything! “Responsible” is whining that she’s 14 and her parents won’t let her stay out past 10 o’clock on the weekends. Cry me a river, Responsible! And “Disappointed” asks Liz what to do about a friend she thinks betrayed her. Liz tells her to make sure that her friend did indeed betray her by talking to her first. You fuckin’ hypocrite, Liz. Then Jessica advises “Older Woman” not to care about what her friends think because it’s no big deal to date someone who is a year younger than you are! LIES! She admits that she did this once herself but conveniently leaves out how she dumped him the second she found out he was younger! “Sloppy but Happy” asks Liz if it’s true that because it’s her mom’s house, she has to keep her room clean. Liz says “I don’t know if this is a right or wrong situation” – are you joking? Pristine immaculate Liz says this? Plus, I was a messy ass teenager, but if I own the house, you better keep it clean. I don’t want stinkin’ roaches in my house! Gross!

Cigarettes make an appearance when “Non-Smoker” asks Jessica what to do about her friends pressuring her to smoke. Non-Smoker needs to choose a different name for herself since she’s actually already started smoking, she just doesn’t want to do it anymore. “Hurt” is an identical twin who’s mad because the boy she likes is always hanging out with her sister now. Gee, sound familiar? Jessica admits she is having a hard time answering this one, then says the twins should make an agreement not to go after each other’s “potential boyfriends.” I don’t even need to comment. “Nervous” stupidly asks ELIZABETH what to do about her older boyfriend. She’s fifteen and he’s eighteen, so he could go to jail for it, but Liz encourages her to tell the ‘rents and says, “Unless there’s something wrong with this guy, I don’t see why they won’t approve.” You don’t, huh Liz? Oh wait, I forgot your friend Enid was dating a college boy when she was still fifteen. “Concerned” tells Jessica her sister’s boyfriend is a pot smoker and wants to know what to do. Jessica tells her to tell her sister and let her decide what to do which is a pleasant surprise. Good thing she didn’t ask Liz, or someone would’ve gotten ratted out to the authorities.

Horoscope section: This area just tells you things about yourself based on your sign. I LOVED horoscopes when I was a kid, especially because I really do fit the description of a Leo. Unfortunately, in the back of this book the first line is missing from my Leo ‘scope! Looks like a printing error and actually, I remember it being in my book also. Thanks Bantam. My horoscope says I am “proud, dynamic, and generous” and that I need to think things through before making big decisions. Considering the amount of money I have dropped on Sweet Valley books, I would say that’s very accurate. Sigh.

Calendar section: This is cute. Just three months to each page with a different illustration for each one. Andrea wrote names of people having birthdays in here. I see the September calendar block has one of those old-fashioned bookstraps from like, the 50s, as the illustration.

The cover resembles the speckled composition books that the girls used in Slam Book Fever. The picture of Jess and Liz from Double Love is here, as is the new Sweet Valley High logo that started showing up on the cover backs a few books ago.

Laurie Pascal Wenk wrote this one. I guess she is related to Francine 🙂

If you couldn’t tell, I had way too much fun with this one. What are your Slam Book memories?

Coming up next: The Jessica-A.J. saga begins!